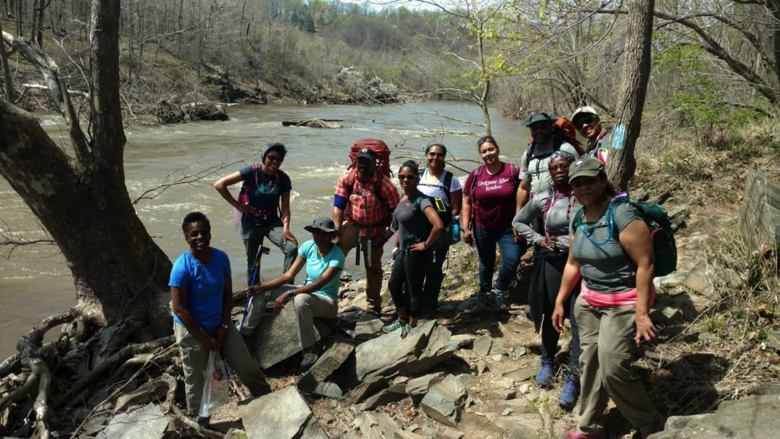 For black people, feeling welcome and safe in the outdoors isn’t a given. Even without insensitive or ignorant actions from others, everyone feels intimidated about trying something new, especially when none of your friends and families are exploring the outdoors in a recreational way. Outdoor Afro is changing that. The organization creates a space where black people and nature meet. That isn’t to say that others aren’t welcome, including non-black people like best friends, wives and husbands, but the point is to center the African American experience and create a safe place for black people that hasn’t existed on any broad scale before.

That’s why Outdoor Afro offers a variety of outings that meet people where they are. That could be as simple as sitting on the grass in the city and taking in a movie, doing yoga in the park, or hiking at an area forest preserve. It’s a journey and a continuum. Not everyone wants to climb a mountain, but maybe someone will start down a path and then be surprised by how much they enjoyed it and will want to do more.

Other opportunities for Outdoor Afro participants include visiting and learning about significant places. A walking tour through Chicago’s Bronzeville neighborhood offers a combination of history, art, and culture related to the Great Migration and a window into a historical hotbed of African American culture. Other outdoor activities simply focus on experiencing joy and trying new things. At times the group may address emotional trauma, like police violence, or center the activity around personal and collective healing.

Christine Meissner got involved with Outdoor Afro in the fall of 2016 in Chicago, her home city. Her passion for hiking and backpacking started in the Peace Corps, living in Macedonia, a mountainous country for two years. Since coming home, she wanted to do more. She liked the organization’s message of a multi-generational approach, and after participating in a couple of local events, including a two-day camping event across two of the organization’s networks in both Chicago and St. Louis, she was hooked. The community felt safe and she loved that they could enjoy each other’s company while celebrating their culture and history.

When one of the founding network leaders in Chicago stepped down, Outdoor Afro put out a call for leaders, Meissner was one of many who applied, and she was selected. “I jumped in,” she says. “Being a volunteer leader is not an extra burden or responsibility. It’s woven into my everyday life.”

Now in her third year as an Outdoor Afro leader, she can see how she’s changed and grown by attending the organization’s annual training and professional development and through surmounting challenges outdoors. She sees the same changes in the participants that join her, as they return again and again, doing increasingly difficult hikes or getting involved in activities they wouldn’t normally do, like kayaking. She also sees people who join and then start doing the same kinds of things on their own, such as camping, and then they bring more people along.

It’s not only important to inspire connections and leadership in nature among Outdoor Afro participants, it’s also important for the world to expect and welcome African Americans on the trail. This was underscored for Meissner one day as she got ready to lead about a dozen participants on a hike at the Indiana Dunes. Her group was excited to be there, to shed some stress, and enjoy one another while they experienced the glorious world around them. That’s when two people on their return route came off the trail and headed toward them. Rather than offering a simple greeting on the way to the car, the woman seemed affronted and said, “What are you doing here?” Her dogs sniffed the group, upping the sense that this was her territory and their group was somehow trespassing.

This jarring interaction reflects a landslide of traumatic context, history and experiences for black people in American history; the group found themselves ambushed by fear and mistrust, when they’d set out on a mission for joy, some on a hike for the very first time. Meissner took a deep breath and responded. “We’re going hiking, just like you.”

It should go without saying that we all have a right to those universal pleasures and benefits that come when we move our bodies and take in vitamin D. The positive impacts get compounded when we strengthen community bonds. Outdoor Afro outings start with an opening circle that sets the tone where the leader shares the mission of why they are there. At the end, a closing circle gives people the opportunity to talk about what they gained. “Sometimes people share a word, or more, but often what I hear people tell me is that they feel rejuvenated and excited,” says Meissner. She also enjoys finding out who’s a first-timer and seeing that it’s always a balance of repeat participants and new people coming in, making the family bigger.

This process of showing up means that more people can have a safe, welcoming and meaningful experience in the outdoors. Meissner particularly likes seeing people her parents’ age getting out to hike and going on overnight camping trips even when the message they heard growing up was, “Black people don’t camp.” The fact that they are out there makes that statement a stereotype rather than a fact. In fact, black people do camp. And because they are doing it, it sends a strong message to younger people that they can too.